First of all, thank you so much for the kind words regarding my previous post about Christiana Elizabeth Howard Smith. I am truly humbled by the response I have received.

Due to the overwhelming response, I wanted to share a few letters that her daughter, Laura D. Smith (my 2nd great grandmother) wrote to her uncle, Columbus Howard; who resided in Liberty County Georgia.

At the time she wrote these letters, she was 23 years old living in Levy County, Florida. Her father, James Bryant Smith, had passed away 3 years prior. These were written roughly around the same time her mother's letters were written in the aforesaid post.

Laura went on to marry Hustis Studstill on the 1st of September, 1878; just 3 months after writing the second letter. Laura and Hustis went on to have five children: Emanuel, Ola, Elizabeth, Lonnie, and Atlanta (my great grand mother).


I have taken the time to transcribe these letters and I promise I will start working on transcribing Christiana's letters soon. So be sure to subscribe to this blog, or follow me on Facebook to be updated on future posts.


Once again, thank you dearly for taking the time and interest in my family.

And... here are the letters: 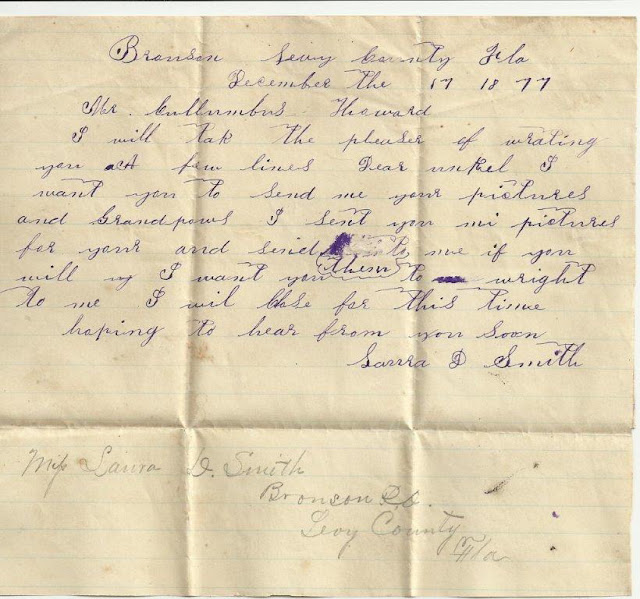 Mr. Columbus Howard
I will tak the pleaser of wrating
you A few lines Dear unkel I
want you to send me your pictures
and grandpaws I sent you mi pictures
for your and send them to me if you
will (?) I want you to wright
to me I wil close for this time
hoping to hear from you soon
Laura D Smith 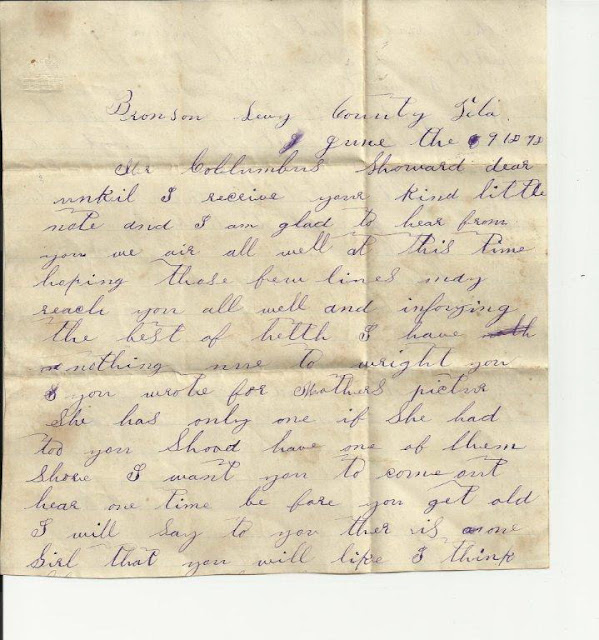 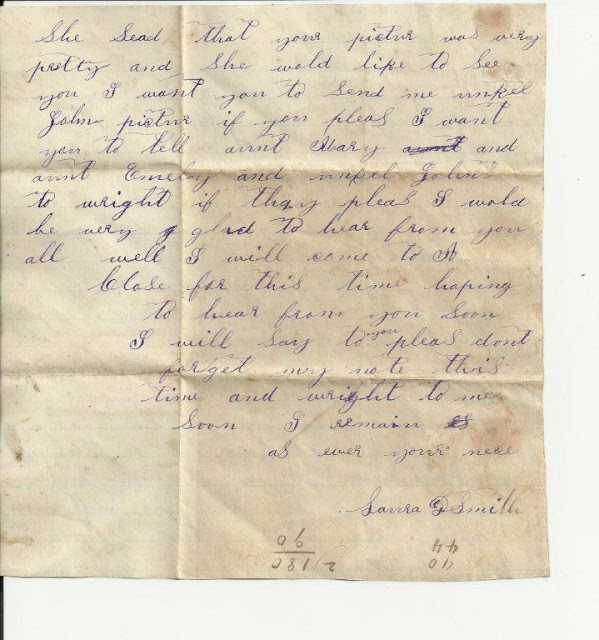 Bronson Levy County Fla
June the 9 1878
Mr. Columbus Howard dear
unkil I receive your kind little
note and I am glad to hear from
you we air all well at this time
hoping those few lines may
reach you all well and injoying
the best of helth I have
nothing nue to wright you
you wrote for Mothers picture
she has only one if she had
too you shood have one of them
Shore I want you to come out
hear one time be fore you get old
I will say to you ther is one
Girl that you will like I think

Laura passed away on the 26th of August, 1916. She was interred at Ebenezer Cemetery, near Chiefland Florida, Levy County.

Posted by Kindred Roots at 8:21 AM