Not all Southern county seats are located in large metropolitan cities. Reidsville GA is a perfect example of this. With a population of roughly 5000 people, it still holds the charm of a small Southern town with the quaintness of the old South. Founded in about 1828, many people have lived and died here. Many families have called it home for generations, and yet, many families have moved away with prospects of a better life.

It is unclear to me why, but it seems that many of my ancestors have, at one point or another, lived in Tattnall County. Being so rural, and with such a small population, it seems odd to me how so many in my family tree have come from Tattnall County. Many of these families of mine never even met until generations later in Florida. So I had to take a trip to Tattnall County to see what the scenery was like, what the towns looked like, the view of the farms, the old houses, and the graves of those who came before me. 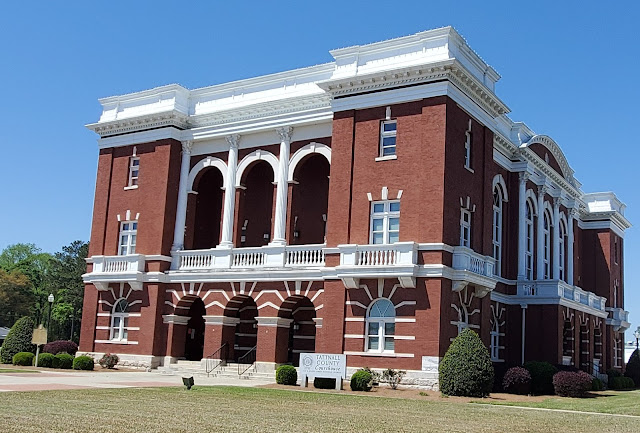 Passing through Reidsville, I gazed upon the beautiful architecture of the Tattnall County Courthouse. I had to stop and take a few photos and videos. The current courthouse building was built in 1902, and was the 3rd courthouse building of Tattnall County. Over the last century, this building has had renovations and restorations made to it. Originally, it looked a bit different with a clock tower that nearly doubled it's height. Here in this building, and the previous ones before it, my ancestors and kin have conducted business, made transactions, and applied for marriage licenses. Inside, the records of my people are stored for safe keeping for future generations.

It was, at one point, in a sad shape and fallen into disrepair. A committee was formed to restore the old building and preserve it's beauty. It is currently used as a civic center for Reidsville.

Adjacent to the Alexander Hotel was a small park with numerous monuments and a path that would take a pedestrian by each monument. Each memorial was dedicated to a war that our country has participated in and on each monument were the names of Tattnall County residents that participated in that war. It was a beautiful homage to our ancestors and kin who have served and fought for our country.

The following is video that I took of the courthouse, Alexander Hotel, and the Veterans Memorial Park followed by photos of each of the monuments.

Posted by Kindred Roots at 7:12 AM